Be radiant, Be yourself, Share your glow with others!

What is "GLOW"? GLOW is a group of folks from the Woods Hole science institutions (WHOI, MBL, NOAA-NEFSC, SEA, USGS, and Woodwell Climate) and community who seek to make Woods Hole a more welcoming place to live and work and to provide support and resources to people who identify as LGBTQIA+.
When it was originally created, GLOW was an acronym for “Gays, Lesbians and Others of WHOI”. The meaning of the W was later changed to stand for “Woods Hole” so as to include members of the other research institutions and the local, non-scientific community. However, continuing to center Gays and Lesbians in our name while using “Others” to describe the rest of the queer community does not align with our aims for inclusivity. So, this year we are changing our name... to GLOW! Just GLOW. An imperative verb, meaning to shine and, above all else, to be yourself!

Members of our community identify in a number of different ways. The acronyms LGBTQIA+ (Lesbian, Gay, Transgender, Queer/Questioning, Intersex, Asexual/Ally, plus more) and GSM (Gender & Sexual Minority), and the term Queer have often been used to describe our community. But there are a number of identities that are not explicitly mentioned by these acronyms – Non-binary, Pansexual, Gender non-conforming, Gender-queer. At GLOW, all are welcome to be a part of our community, including partners and allies.
This GLOW website should help you find information about the Woods Hole community, support networks and local resources.

Checkout this segment of The Cape Cod Current (MVYRadio) about GLOW.

Get your BE YOURSELF at WHOI t-shirt in rainbow tye-dye or royal blue at the WHOI Discovery Center.

If you would like to contact us, please email glow-owner@whoi.edu. Note, this email address is forwarded to the moderators of the GLOW email list.  If any WHOI students have specific issues or concerns, you are always welcome to bring them to the Academic Programs Office at WHOI. We are here to help however we can.

To learn more about past events, head to our EVENTS page!

You Are Welcome Here

Want a sticker for your office? Click the image below! 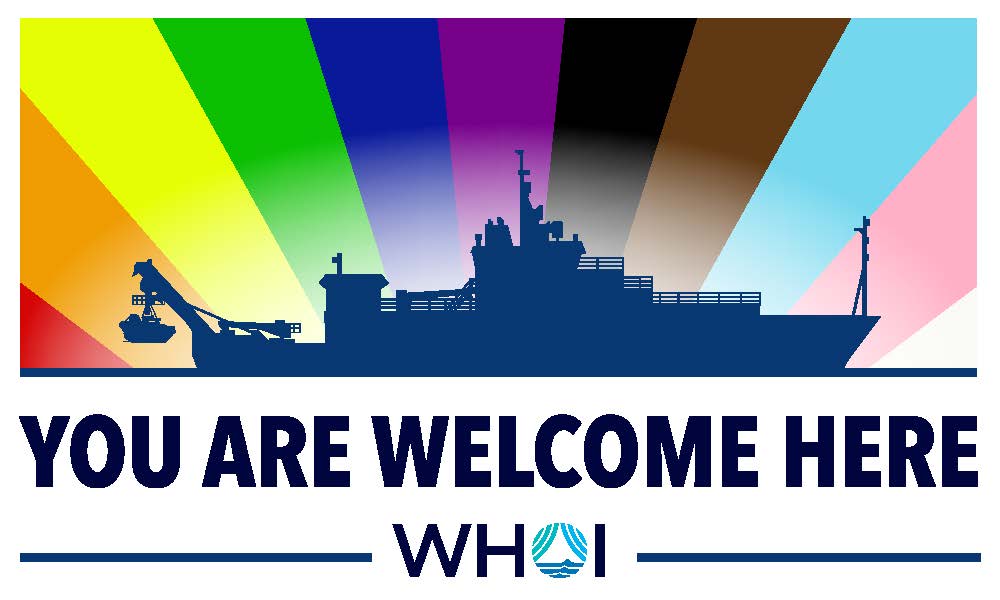 Both terms are inclusive acronyms for referring to the gay community and may be used interchangeably.